When U.S. Presidents began to be seen eating 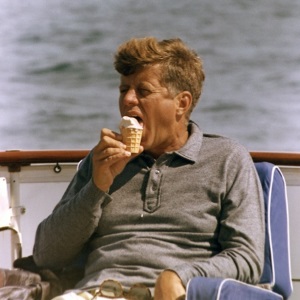 Portraits of the Presidents from Washington into the 20th century presented them as strong, powerful, and confident leaders. However, something shifts in the mid-20th century. Beginning with Franklin Delano Roosevelt and Harry Truman, there’s an explosion of photographs of presidents in more informal settings, often eating. And not eating refined, fancy food, but hot dogs, hamburgers, tacos, ice cream cones, pizza.

While these are not official presidential portraits, they certainly aren’t paparazzi photos, either. They’re not covert sightings of a president in his private quarters, but are instead occasions when a president made himself publicly available for photos. These are tightly crafted efforts to look casual and simple, to present presidents as common people, as everyday Americans just like us.

“Food and the Race for the American Presidency: A Photo Essay” on the Leftovers History website from the Columbia University Department of History (2016)