What the Great Ate: A Curious History of Food and Fame 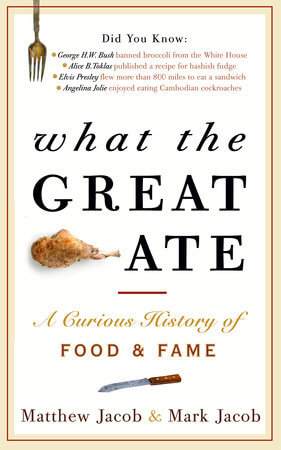 By Matthew Jacob and Mark Jacob

From the publisher: In What the Great Ate, Matthew and Mark Jacob have cooked up a bountiful sampling of the peculiar culinary likes, dislikes, habits, and attitudes of famous—and often notorious—figures throughout history. Here is food

• As code: Benito Mussolini used the phrase “we’re making spaghetti” to inform his wife if he’d be (illegally) dueling later that day.
• As superstition: Baseball star Wade Boggs credited his on-field success to eating chicken before nearly every game.
• In service to country: President Thomas Jefferson, America’s original foodie, introduced eggplant to the United States and wrote down the nation’s first recipe for ice cream.

From Emperor Nero to Bette Davis, Babe Ruth to Barack Obama, the bite-size tidbits in What the Great Ate will whet your appetite for tantalizing trivia.

Matthew Jacob began his career in journalism and later worked for several nonprofit organizations based in Washington, D.C. His op-ed columns have appeared in the Los Angeles Times, USA Today, CNet.com, the Boston Globe, and many other print and online media. Jacob writes food columns for the Huffington Post. He grew up in Arkansas, but he has lived in the Washington, D.C. area for more than 20 years.