We Are What We Eat: Ethnic Food and the Making of Americans 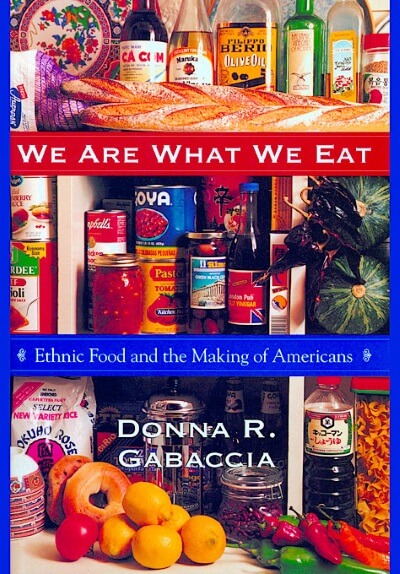 From the publisher: Ghulam Bombaywala sells bagels in Houston. Demetrios dishes up pizza in Connecticut. The Wangs serve tacos in Los Angeles. How ethnicity has influenced American eating habits—and thus, the make-up and direction of the American cultural mainstream—is the story told in We Are What We Eat. It is a complex tale of ethnic mingling and borrowing, of entrepreneurship and connoisseurship, of food as a social and political symbol and weapon—and a thoroughly entertaining history of our culinary tradition of multiculturalism.

The story of successive generations of Americans experimenting with their new neighbors’ foods highlights the marketplace as an important arena for defining and expressing ethnic identities and relationships. We Are What We Eat follows the fortunes of dozens of enterprising immigrant cooks and grocers, street hawkers and restaurateurs who have cultivated and changed the tastes of native-born Americans from the seventeenth century to the present. It also tells of the mass corporate production of foods like spaghetti, bagels, corn chips, and salsa, obliterating their ethnic identities. The book draws a surprisingly peaceful picture of American ethnic relations, in which “Americanized” foods like Spaghetti-Os happily coexist with painstakingly pure ethnic dishes and creative hybrids.

Donna Gabaccia invites us to consider: If we are what we eat, who are we? Americans’ multi-ethnic eating is a constant reminder of how widespread, and mutually enjoyable, ethnic interaction has sometimes been in the United States. Amid our wrangling over immigration and tribal differences, it reveals that on a basic level, in the way we sustain life and seek pleasure, we are all multicultural.

Donna R. Gabaccia is Professor of History at the University of Toronto, Scarborough.