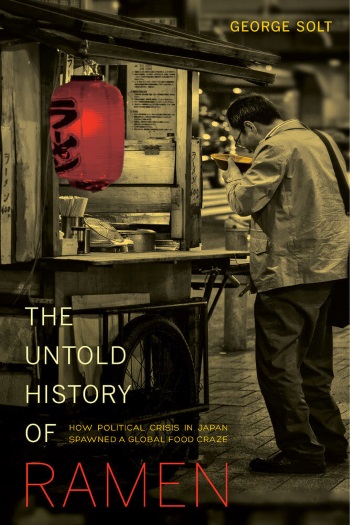 From the publisher: A rich, salty, and steaming bowl of noodle soup, ramen has become an international symbol of the cultural prowess of Japanese cuisine. In this highly original account of geopolitics and industrialization in Japan, George Solt traces the meteoric rise of ramen from humble fuel for the working poor to international icon of Japanese culture.

Ramen’s popularity can be attributed to political and economic change on a global scale. Using declassified U.S. government documents and an array of Japanese sources, Solt reveals how the creation of a black market for American wheat imports during the U.S. occupation of Japan (1945–1952), the reindustrialization of Japan’s labor force during the Cold War, and the elevation of working-class foods in redefining national identity during the past two decades of economic stagnation (1990s–2000s), all contributed to the establishment of ramen as a national dish.

This book is essential reading for scholars, students of Japanese history and food studies, and anyone interested in gaining greater perspective on how international policy can influence everyday foods around the world.