United States of Beer: A Freewheeling History of the All-American Drink 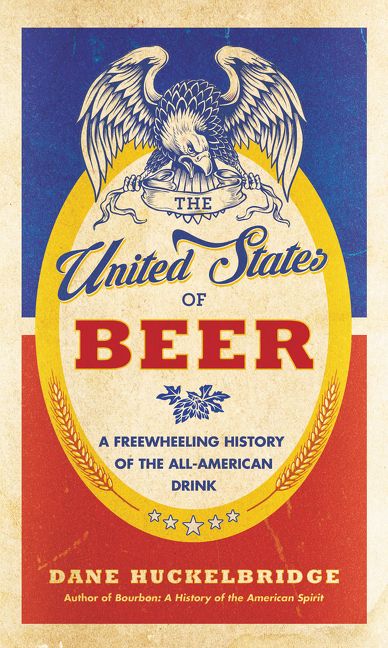 From the publisher: Equally irreverent and revealing, Dane Huckelbridge’s masterful cultural history charts the wild, engrossing, and surprisingly complex story of our favorite alcoholic drink, showing how America has been under the influence of beer at almost every stage. From the earliest Native American corn brew (called chicha) to the waves of immigrants who brought with them their unique brewing traditions, to the seemingly infinite varieties of craft-brewed suds found on tap today, beer has claimed an outsized place in our culture that far transcends its few simple ingredients—water, barley, and hops. And yet despite its ubiquity—Americans consume some six billion gallons of beer each year—the story of beer in the USA is as diverse and fascinating as the country itself, overflowing with all the color and character of America’s many peoples and regions.

A brewery was among the first orders of business when the Pilgrims landed at Plymouth Rock, and George Washington tried (but mostly failed) to produce beer at Mount Vernon. Since 1776, America has operated under the principle of E. Pluribus, Brewdog: out of many regional brews, one nation of beer drinkers. The first “macrobrew” revolution was in the Midwest, where an influx of German immigrants in the 1800s changed American brewing forever. Bavarian newcomers brought their now-universal lager to St. Louis, Milwaukee, and the rest of the heartland; Busch, Pabst, and Schlitz soon followed, establishing the first great beer empires and ushering in a golden age of brewing that would last into the twentieth century. Then in 1920, Prohibition threatened the very existence of beer in America. Brewers were forced to diversity into a variety of odd products—among them malted milk, porcelain, and cement—in order to survive.

When the spigot finally reopened in 1933, many breweries were tapped out. By the early 1980s, a country that once boasted more than a thousand breweries was down to a few dozen, with little to distinguish among them. But stirred by the American entrepreneurial spirit, a cadre of daring young trailblazers decided our options shouldn’t be limited to watery, flavorless macrobrews. The microbrew movement began on the West Coast, but quickly spread: today there are thousands of craft breweries, scattered across all fifty states.

Drawing upon a wealth of little-known historical sources, explaining the scientific breakthroughs that have shaped beer’s evolution, and mixing in more than a splash of dedicated on-the-ground research, The United States of Beer offers a raucous and enlightening toast to the all-American drink.

Dane Huckelbridge is the author of Bourbon: A History of the American Spirit. His writing has appeared in the Wall Street Journal, Tin House, The New Republic and New Delta Review. His novel, Castle of Water (2017), was hailed as ‘a unique, inventive exploration of love, loss and survival’ by Kristin Hannah, #1 New York Times bestselling author of The Nightingale. A graduate of Princeton University, Dane lives in Paris, France.