Uncorking the Past: The Quest for Wine, Beer, and Other Alcoholic Beverages 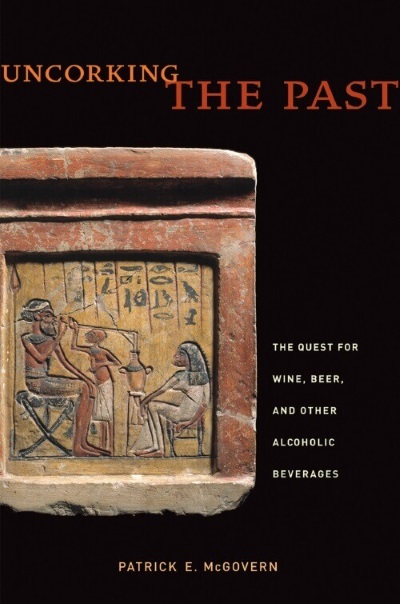 From the publisher: In a lively gastronomical tour around the world and through the millennia, Uncorking the Past tells the compelling story of humanity’s ingenious, intoxicating search for booze. Following a tantalizing trail of archaeological, chemical, artistic, and textual clues, Patrick E. McGovern, the leading authority on ancient alcoholic beverages, brings us up to date on what we now know about the creation and history of alcohol, and the role of alcohol in society across cultures.

Along the way, he integrates studies in food and sociology to explore a provocative hypothesis about the integral role that spirits have played in human evolution. We discover, for example, that the cereal staples of the modern world were probably domesticated in agrarian societies for their potential in fermenting large quantities of alcoholic beverages. These include the delectable rice wines of China and Japan, the corn beers of the Americas, and the millet and sorghum drinks of Africa. Humans also learned how to make mead from honey and wine from exotic fruits of all kinds: even from the sweet pulp of the cacao (chocolate) fruit in the New World.

The perfect drink, it turns out-whether it be mind-altering, medicinal, a religious symbol, liquid courage, or artistic inspiration-has not only been a profound force in history, but may be fundamental to the human condition itself. This coffee table book will sate the curiosity of any armchair historian interested in the long history of food and wine.

Patrick E. McGovern is Scientific Director of the Biomolecular Archaeology Laboratory for Cuisine, Fermented Beverages, and Health at the University of Pennsylvania Museum. His books include Ancient Wine: The Search for the Origins of Viniculture, the 2004 Grand Prize winner in History, Literature, and Fine Arts, Organisation Internationale de la Vigne et du Vin. McGovern’s research on the origins of alcoholic beverages has been featured in Time, The New York Times, The New Yorker, Nature, and elsewhere.