Twain’s Feast: Searching for America’s Lost Foods in the Footsteps of Samuel Clemens 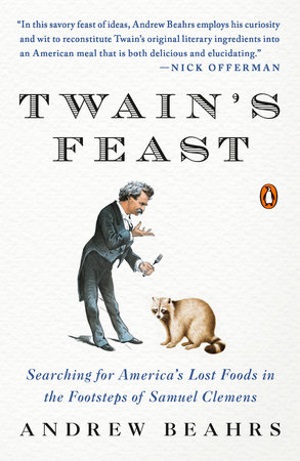 From the publisher: One young food writer’s search for America’s lost wild foods, from New Orleans croakers to Illinois prairie hens, with Mark Twain as his guide.

In 1879, Mark Twain paused during a European tour to compose a fantasy menu of the American dishes he missed the most. A true love letter to American food, the menu included some eighty specialties, from Mississippi black bass to Philadelphia terrapin. Andrew Beahrs chooses eight of these regionally distinctive foods, retracing Twain’s footsteps as he sets out to discover whether they can still be found on American tables. Weaving together passages from Twain’s famous works and Beahrs’s own adventures, this travelogue-cum-culinary-history takes us back to a bygone era when wild foods were at the heart of American cooking.

Andrew Beahrs is the author of two novels, and his work has appeared in The New York Times, Gastronomica, Virginia Quarterly Review, The Writer’s Chronicle, Ocean Magazine, Food History News, and Living Bird. He received his M.A. in anthropology- archaeology from the University of Virginia and his M.F.A. in fiction from Spalding University.