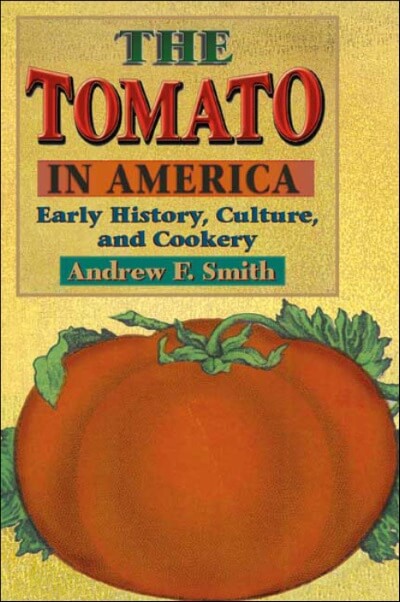 From the publisher: Arguably the most popular fruit in the world, the tomato holds a favored place in the United States, which ranks as the world’s largest producer of commercial tomatoes. With as many as forty million Americans growing tomatoes in backyard gardens and the average American consuming more than seventeen pounds of fresh tomatoes each year, twentieth-century Americans are enamored of the fruit once known as the “love apple.”

While the tomato’s enormous popularity is indisputable, its history has been clouded by a crop of unsubstantiated and often contradictory tales about its rise to prominence. Almost every spring otherwise respectable horticultural, culinary, and historical publications feature stories claiming that our forbears considered them poisonous or aphrodisiacal, that they were not eaten in this country until the 1880s, and that Robert Gibbon Johnson bravely consumed the first tomato in the United States before a crowd that expected him to expire from such foolery. In The Tomato in America, Andrew Smith debunks the oft-repeated myths about the tomato’s introduction and consumption, disclosing instead a legacy even more bizarre and entertaining.

Smith suggests that Americans began consuming tomatoes as early as the seventeenth century, explains how tomatoes became one of America’s first food fads, and recounts some of the quackery that has surrounded the fruit, including the infamous tomato pill. Smith also tells of the cookbook authors, horticulturalists, and medical professionals who played a crucial role in incorporating the tomato into American cuisine, and he includes more than fifty vintage recipes that, until now, have been buried along with the tomato’s legitimate heritage.

Andrew F. Smith, a writer and lecturer on the subjects of education and international affairs, began writing about tomatoes as a hobby in 1987.