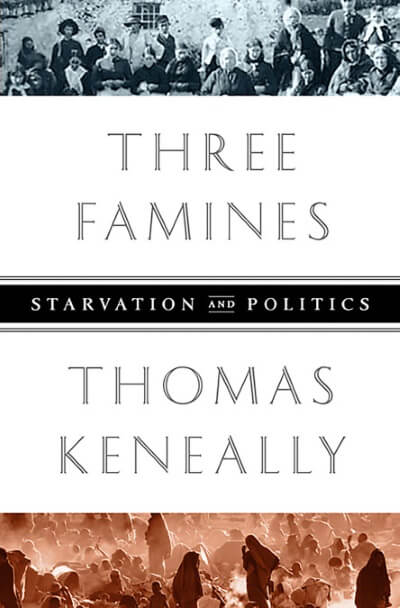 From the publisher: Through the lens of three of the most devastating food crises in modern history—the Górta Mor of British-ruled Ireland, the great famine of British-ruled Bengal in 1943, and the string of famines that plagued Ethiopia during the 1970s and 1980s, Booker Prize–winning author Thomas Keneally vividly evokes the terrible cost of mass starvation at the level of the individual who starves and the nation that watches. Famine is widely misunderstood as a completely natural catastrophe. Keneally recounts that while the triggers—crop, pestilence, and drought—are natural, the political and ideological choices that prolong famine are man-made. Government neglect and individual venality, not food shortages, are historically the causes of sustained, widespread hunger.

In Ireland, British authorities ignored the existence of a food crisis while the famished fed on diseased cattle and human remains.

In Bengal, where over four million starved to death, Field Marshal Archibald Wavell’s reports of people dying in Calcutta’s streets and demands for relief resulted in little more than a mocking cable from Winston Churchill asking, why, if food was so scarce, hadn’t Gandhi died yet?

In Ethiopia, Mengistu Haile Mariam arranged for 400,000 bottles of whisky to ship to Addis Ababa from Britain to celebrate the tenth anniversary of the revolution that put him in power, while one person died every twenty minutes in Korem. These three famines are stark examples of how throughout history, racial preconceptions, administrative neglect, and incompetence have been more lethal than the initiating blights or crop failures. Keneally’s startling narrative history is a sobering warning to the authorities in charge of mercy in our time to stop making choices that feed famine instead of the starving.

Thomas Keneally won the Booker Prize in 1982 with Schindler’s Ark, later made into the Academy Award-winning film Schindler’s List by Steven Spielberg. He has written ten works of non-fiction, including his recent memoir Searching for Schindler. His novels The Chant of Jimmy Blacksmith, Gossip From the Forest, and Confederates were all shortlisted for the Booker Prize, while Bring Larks and Heroes and Three Cheers for the Parclete won the Miles Franklin Award. He lives in Australia.