They Eat That? A Cultural Encyclopedia of Weirds and Exotic Food from around the World 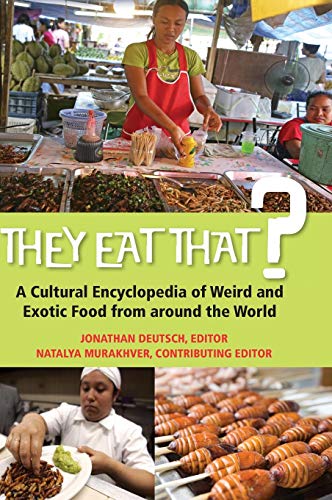 From the publisher: The title They Eat That?: A Cultural Encyclopedia of Weird and Exotic Food from around the World says it all. This fun encyclopedia, organized A–Z, describes and offers cultural context for foodstuffs people eat today that might be described as “weird”—at least to the American palate. Entries also include American regional standards, such as scrapple and chitterlings, that other regions might find distasteful, as well as a few mainstream American foods, like honey, that are equally odd when one considers their derivation.

A long narrative entry on insects, for example, discusses the fact that insects are enjoyed as a regular part of the diet in some Asian, South and Central American, and African countries. It then looks at the kinds of insects eaten, where and how they are eaten, cultural uses, nutrition, and preparation. Each of the encyclopedia’s 100 entries includes a representative recipe or, for a food already prepared like maggoty cheese, describes how it is eaten. Each entry ends with suggested readings.

Jonathan Deutsch, PhD, is associate professor of culinary arts at Kingsborough Community College, Brooklyn, NY, and assistant professor of public health at The City University of New York Graduate Center, New York, NY. He earned his doctorate in food studies at New York University and is also a graduate of the Culinary Institute of America.

Natalya Murakhver holds a master’s degree in food studies from New York University and has written about food for several magazines.