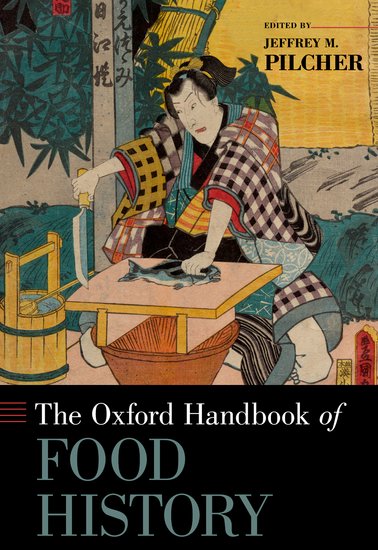 From the publisher: Food matters, not only as a subject of study in its own right, but also as a medium for conveying critical messages about capitalism, the environment, and social inequality to diverse audiences. Recent scholarship on the subject draws from both a pathbreaking body of secondary literature and an inexhaustible wealth of primary sources–from ancient Chinese philosophical tracts to McDonald’s menus–contributing new perspectives to the historical study of food, culture, and society, and challenging the limits of history itself.

The first two sections examine the foundations of food history, not only in relation to key developments in the discipline of history itself–such as the French Annales school and the cultural turn–but also in anthropology, sociology, geography, pedagogy, and the emerging Critical Nutrition Studies. The following three sections sketch various trajectories of food as it travels from farm to table, factory to eatery, nature to society.

Each section balances material, cultural, and intellectual concerns, whether juxtaposing questions of agriculture and the environment with the notion of cookbooks as historical documents; early human migrations with modern culinary tourism; or religious customs with social activism. In its vast, interdisciplinary scope, this handbook brings students and scholars an authoritative guide to a field with fresh insights into one of the most fundamental human concerns.

Jeffrey M. Pilcher is professor of history, University of Minnesota. His books include The Sausage Rebellion: Public Health, Private Enterprise, and Meat in Mexico City, 1890-1917; Food in World History; and Que vivan los tamales! Food and the Making of Mexican Identity, which won the Thomas F. McGann Memorial Prize.