The history of the refrigerator 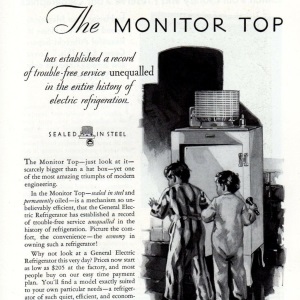 William C. Durant started the Frigidaire Company in 1918 to mass-produce refrigerators based on the invention of a self-contained refrigerator, with a compressor on the bottom of the cabinet.

In 1927, General Electric introduced the “Monitor-Top,” which became the first refrigerator to see widespread use – more than a million units were produced. The compressor assembly, which emitted a great deal of heat, was placed above the cabinet. These refrigerators used either sulphur dioxide or methyl formate as a refrigerant. However, electric fridges were not yet mass-produced and were mainly owned by the wealthy, costing around $1,000.

See:
“The history of the refrigerator” on the Sandvik company website (Sandvik is a manufacturer of advanced stainless steels and special alloys.)