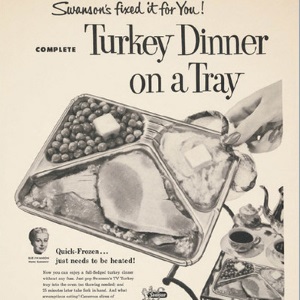 The first successful frozen dinner for preparing and eating at home was called the “One-Eyed Eskimo.” Albert and Meyer Bernstein began selling it in 1949 in the Pittsburgh, Pennsylvania area. The choices were turkey, pot roast, swiss steak, chicken, and salisbury steak meals packaged in three-compartment aluminum foil trays and selling for 49 cents to 89 cents.

By 1954, the brothers had sold more than 2.5 million frozen dinners to consumers east of the Mississippi River. But it was downhill from there because that year an Omaha, Nebraska, manufacturer of frozen chicken pot pies introduced its own 98 cent frozen turkey dinner. Swanson sold 10 million of them by the end of 1954 and dominated the market after that.

“TV Dinners” by Denzil Green on the Cooks Info website (2018)