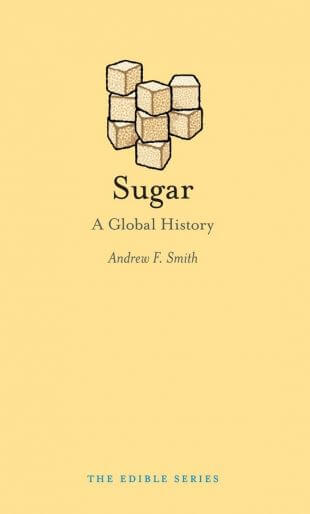 From the publisher: Sugar is one of the most beloved substances consumed by humans, and also one of the most reviled. It has come to dominate our diets – whether in candy, desserts, soft drinks or even bread and pasta sauces – for better and for worse. This fascinating history of this addictive ingredient reveals its incredible value as a global commodity and explores its darker legacies of slavery and widespread obesity.

Sugar’s past is chock-full of determined adventurers: relentless sugar barons and plantation owners who worked alongside plant breeders, food processors, distributors and politicians to build a business based on our cravings. Exploring both the sugar cane and sugar beet industries, Andrew F. Smith tells story after story of those who have made fortunes and those who have met their demise because of sugar’s simple but profound hold on our palates. Delightful and surprisingly action-packed, this book offers a layered and definitive tale of sugar and the many people who have been caught in its spell, from barons to slaves, and from chefs to the countless among us born with that insatiable devil – the sweet tooth.

Andrew F. Smith is a hamburger enthusiast who teaches culinary history at the New School University in Manhattan since 1996. He is the author or editor of twenty-eight books, including: The Encyclopedia of Junk Food and Fast Food (2006) and edited The Oxford Companion to American Food and Drink (2007). His other books include: Hamburger (2008), Eating History: Thirty Turning Points in the Making of American Cuisine (2009), Potato (2011) in Reaktion’s Edible series. The Oxford Encyclopedia of Food and Drink in America (2nd edn 2013), Sugar: A Global History (2015) and Savoring Gotham: A Food Lover’s Companion to New York City (2015).