Starving the South: How the North Won the Civil War 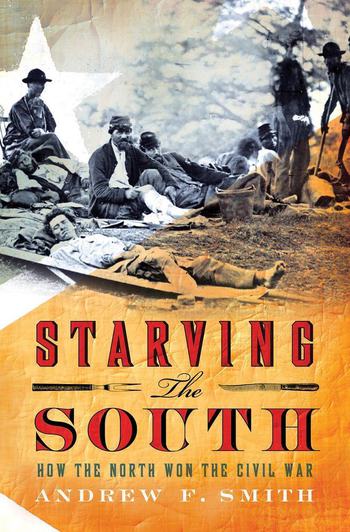 From the publisher: In April 1861, Lincoln ordered a blockade of Southern ports used by the Confederacy for cotton and tobacco exporting as well as for the importation of food. The Army of the Confederacy grew thin while Union dinner tables groaned and Northern canning operations kept Grant’s army strong. In Starving the South, Andrew Smith takes a gastronomical look at the war’s outcome and legacy.

While the war split the country in a way that still affects race and politics today, it also affected the way we eat: It transformed local markets into nationalized food suppliers, forced the development of a Northern canning industry, established Thanksgiving as a national holiday and forged the first true national cuisine from the recipes of emancipated slaves who migrated north. On the 150th anniversary of the Battle of Fort Sumter, Andrew Smith is the first to ask “Did hunger defeat the Confederacy?”

Andrew F. Smith is a faculty member at the New School and editor-in-chief of The Oxford Encyclopedia of Food and Drink in America.