Smokelore: A Short History of Barbecue in America 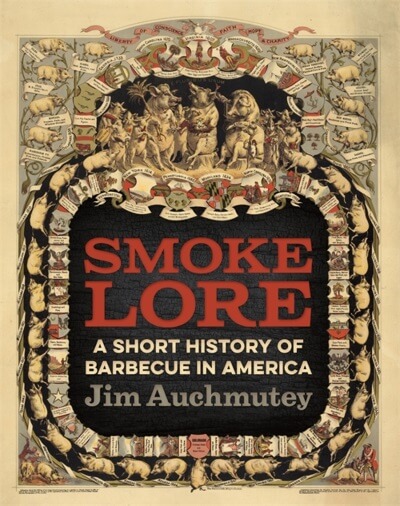 From the publisher: Barbecue: It’s America in a mouthful. The story of barbecue touches almost every aspect of our history. It involves indigenous culture, the colonial era, slavery, the Civil War, the settling of the West, the coming of immigrants, the Great Migration, the rise of the automobile, the expansion of suburbia, the rejiggering of gender roles. It encompasses every region and demographic group. It is entwined with our politics and tangled up with our race relations.

Jim Auchmutey follows the delicious and contentious history of barbecue in America from the ox roast that celebrated the groundbreaking for the U.S. Capitol building to the first barbecue launched into space almost two hundred years later. The narrative covers the golden age of political barbecues, the evolution of the barbecue restaurant, the development of backyard cooking, and the recent rediscovery of traditional barbecue craft.

Along the way, Auchmutey considers the mystique of barbecue sauces, the spectacle of barbecue contests, the global influences on American barbecue, the roles of race and gender in barbecue culture, and the many ways barbecue has been portrayed in our art and literature. It’s a spicy story that involves noted Americans from George Washington and Abraham Lincoln to Louis Armstrong, Elvis Presley, Martin Luther King Jr., and Barack Obama.

Jim Auchmutey spent twenty-nine years at the Atlanta Journal-Constitution as a reporter and editor, twice winning the Cox Newspaper chain’s Writer of the Year award. His food writing has been honored by the James Beard Foundation, the Association of Food Journalists, and the Sigma Delta Chi journalism society. He is coauthor of The Ultimate Barbecue Sauce Cookbook and author of The Class of ’65: A Student, a Divided Town, and the Long Road to Forgiveness. He lives in Georgia and descends from a long line of pitmasters.