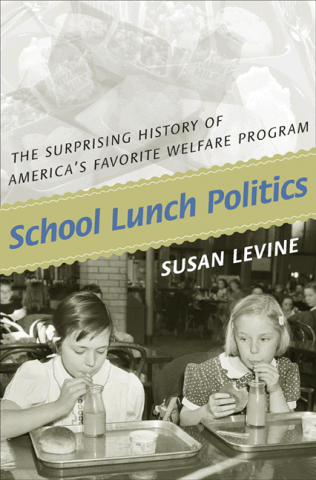 From the publisher: Whether kids love or hate the food served there, the American school lunchroom is the stage for one of the most popular yet flawed social welfare programs in our nation’s history. School Lunch Politics covers this complex and fascinating part of American culture, from its origins in early twentieth-century nutrition science, through the establishment of the National School Lunch Program in 1946, to the transformation of school meals into a poverty program during the 1970s and 1980s. Susan Levine investigates the politics and culture of food; most specifically, who decides what American children should be eating, what policies develop from those decisions, and how these policies might be better implemented.

Even now, the school lunch program remains problematic, a juggling act between modern beliefs about food, nutrition science, and public welfare. Levine points to the program menus’ dependence on agricultural surplus commodities more than on children’s nutritional needs, and she discusses the political policy barriers that have limited the number of children receiving meals and which children were served. But she also shows why the school lunch program has outlasted almost every other twentieth-century federal welfare initiative. In the midst of privatization, federal budget cuts, and suspect nutritional guidelines where even ketchup might be categorized as a vegetable, the program remains popular and feeds children who would otherwise go hungry.

As politicians and the media talk about a national obesity epidemic, School Lunch Politics is a timely arrival to the food policy debates shaping American health, welfare, and equality.

Susan Levine is professor of history at the University of Illinois at Chicago. She is the author of Labor’s True Woman and Degrees of Equality.