Rice and Baguette: A History of Food in Vietnam 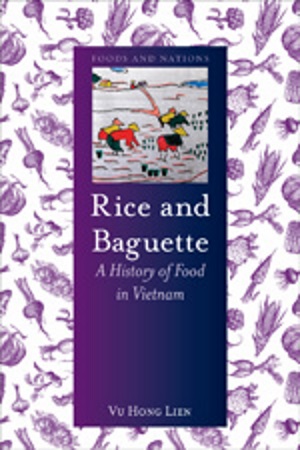 From the publisher: The once-obscure cuisine of Vietnam is, today, a favorite for many people from East to West. Adapted and modified over thousands of years, it is probably best known as a particularly delicious result of combining traditional southeast Asian cookery with visible outside influences—notably, the crunchy baguette—from its French-occupied past. Drawing on archeological evidence, oral and written histories, and wide-ranging research, Vu Hong Lien tells the complex and surprising history of food in Vietnam.
Rice and Baguette traces the prehistoric Việt’s progress from hunter-gathers of mollusks and small animals to sophisticated agriculturalists. The book follows them as they developed new tools and practices to perfect the growing of their crops until rice became a crucial commodity,which then irrevocably changed their diet, lifestyle, and social structure. Along the way, the author shows how Việt cuisine was dramatically influenced by French colonial cookery and products, which introduced a whole new set of ingredients and techniques into Vietnam. Beautifully illustrated throughout and peppered with fascinating historical tales, Rice and Baguette reveals the long journey that Vietnamese food has traveled to become the much-loved cuisine that it is today.