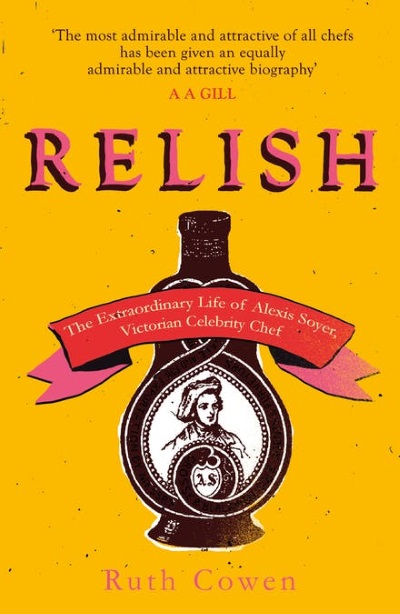 From the publisher: Alexis Soyer (1810-1858) was a working-class Frenchman from an unremarkable town north-west of Paris, but his exceptional cooking skills and ebullient personality turned him into Britain’s first true celebrity chef. He was the first to publish a succession of best-selling cookbooks – one selling more than a quarter of a million copies, an extraordinary figure for the mid-nineteenth century. He was also the first to produce branded merchandise, including a remarkably ingenious stove that fitted in the pocket and bottled sauces decorated with his recognisable portrait. Ahead of his time, he nurtured a flamboyant public profile through a combination of brilliant self-publicity and shameless press manipulation.

But his life’s purpose both came into focus and found its dramatic climax when he renounced his sybaritic lifestyle and elected to travel, for no pay and in the face of real danger, across Europe first to Scutari and later to Balaclava, where thousands of British troops had died of disease and malnutrition during the first long, bitter winter of the Crimean war. One of the first to understand fully the rudiments of good nutrition and mass catering, Soyer had already introduced new principles of large-scale cookery to Ireland during the potato famine of 1847, and he extend his expertise to the British army with spectacular results. Long overlooked by historians, Ruth Cowen vividly recounts the life of a unique personality with a scholarly slice of Victorian history.