Reconstruction in the Cane Fields: From Slavery to Free Labor in Louisiana’s Sugar Parishes, 1862-1880 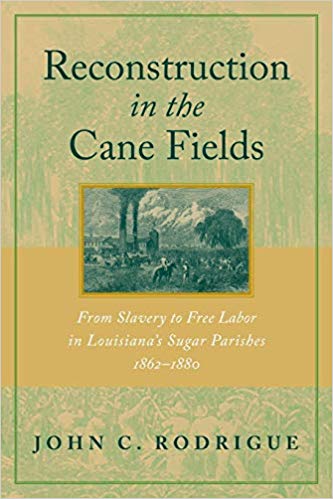 From the publisher: In Reconstruction in the Cane Fields, John C. Rodrigue examines emancipation and the difficult transition from slavery to free labor in one enclave of the South — the cane sugar region of southern Louisiana. In contrast to the various forms of sharecropping and tenancy that replaced slavery in the cotton South, wage labor dominated the sugar industry. Rodrigue demonstrates that the special geographical and environmental requirements of sugar production in Louisiana shaped the new labor arrangements. Ultimately, he argues, the particular demands of Louisiana sugar production accorded freedmen formidable bargaining power in the contest with planters over free labor.

Rodrigue addresses many issues pivotal to all post-emancipation societies: How would labor be reorganized following slavery’s demise? Who would wield decision-making power on the plantation? How were former slaves to secure the fruits of their own labor? He finds that while freedmen’s working and living conditions in the postbellum sugar industry resembled the prewar status quo, they did not reflect a continuation of the powerlessness of slavery. Instead, freedmen converted their skills and knowledge of sugar production, their awareness of how easily they could disrupt the sugar plantation routine, and their political empowerment during Radical Reconstruction into leverage that they used in disputes with planters over wages, hours, and labor conditions. Thus, sugar planters, far from being omnipotent overlords who dictated terms to workers, were forced to adjust to an emerging labor market as well as to black political power.

The labor arrangements particular to postbellum sugar plantations not only propelled the freedmen’s political mobilization during Radical Reconstruction, Rodrigue shows, but also helped to sustain black political power — at least for a few years — beyond Reconstruction’s demise in 1877.

By showing that freedmen, under the proper circumstances, were willing to consent to wage labor and to work routines that strongly resembled those of slavery, Reconstruction in the Cane Fields offers a profound interpretation of how former slaves defined freedom in slavery’s immediate aftermath. It will prove essential reading for all students of southern, African American, agricultural, and labor history.

John C. Rodrigue is assistant professor of history at Louisiana State University. He is coeditor of Freedom: A Documentary History of Emancipation, Series 3, Volume 1, Land, Labor, and Capital: 1865.