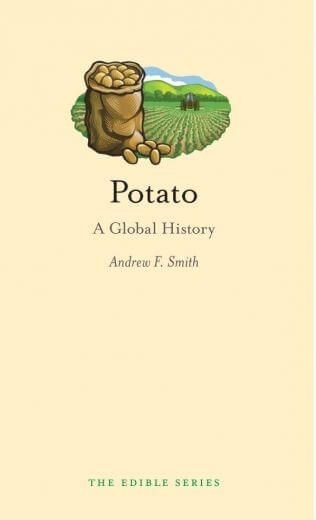 From the publisher: From its obscure pre-Columbian beginnings in South America to its global popularity today, the story of the potato is one of rags to riches. In Potato, esteemed culinary historian Andrew F. Smith reveals the captivating story of a once lowly vegetable that has changed – and continues to change – the world.

First domesticated by prehistoric people in the Andes, the potato has since been adopted by cultures all over the globe. After its discovery by Europeans, governments and monarchs encouraged the people to farm it because it was so nutritious and easy to grow, but its new position as the staple of the poor meant mass starvation in nineteenth-century Ireland when potato blight wiped out the crops. The potato was also adopted by cooks in India and in China, which is now the world’s largest potato producer.

Despite its popularity, in this era of both fast food and health consciousness, the potato is now suffering negative publicity for the very quality for which it was lauded by our forefathers: being a good source of carbohydrate. But is it fair to blame the humble spud for our habit of covering it with butter or sour cream or deep-frying it in oil?

Potato is a captivating account of the history, economy, politics and gastronomy behind this beloved tuber. Like a well-dressed baked potato, this book will both comfort and satisfy the reader.

Andrew F. Smith is a hamburger enthusiast who teaches culinary history at the New School University in Manhattan since 1996. He is the author or editor of twenty-eight books, including: The Encyclopedia of Junk Food and Fast Food (2006) and edited The Oxford Companion to American Food and Drink (2007). His other books include: Hamburger (2008), Eating History: Thirty Turning Points in the Making of American Cuisine (2009), Potato (2011) in Reaktion’s Edible series. The Oxford Encyclopedia of Food and Drink in America (2nd edn 2013), Sugar: A Global History (2015) and Savoring Gotham: A Food Lover’s Companion to New York City (2015). He lives in New York.