Pomodoro! A History of the Tomato in Italy 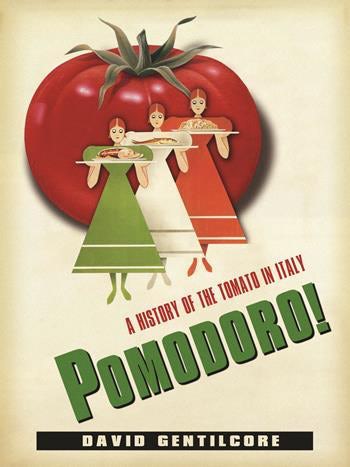 From the publisher: More than just the beloved base ingredient of so many of our favorite dishes, the tomato has generated both profound riches and controversy in its farming, processing, exchange, and consumption. It is a crop infused with national pride and passion for those who grow it, and a symbol of Old World nostalgia for those who claim its history and legacy.

Over time, the tomato has embodied a range of values and meanings. From its domestication in Central America, it has traveled back and forth across the Atlantic, powering a story of aspiration and growth, agriculture and industry, class and identity, and global transition. In this entertaining and organic history, David Gentilcore recounts the surprising rise of the tomato from its New World origin to its Old World significance. From its inauspicious introduction into Renaissance Europe, the tomato came to dominate Italian cuisine and the food industry over the course of three centuries.

Gentilcore explores why elite and peasant cultures took so long to assimilate the tomato into Italian cooking and how it eventually triumphed. He traces the tomato’s appearance in medical and agricultural treatises, travel narratives, family recipe books, kitchen accounts, and Italian art, literature, and film. He focuses on Italy’s fascination with the tomato, painting a larger portrait of changing trends and habits that began with botanical practices in the sixteenth century and attitudes toward vegetables in the seventeenth and eighteenth centuries, and concluded with the emergence of factory production in the nineteenth. Gentilcore continues with the transformation of the tomato into a national symbol during the years of Italian immigration and Fascism and examines the planetary success of the “Italian” tomato today, detailing its production, representation, and consumption.

David Gentilcore is professor of early modern history at the University of Leicester. He has written widely on the social and cultural history of Italy, from popular religion to the practices of medicine and healing. He is the author of Medical Charlatanism in Early Modern Italy, which was awarded the Jason A. Hannah Medal by the Royal Society of Canada.