Politics of Purity: Harvey Washington Wiley and the Origins of Federal Food Policy 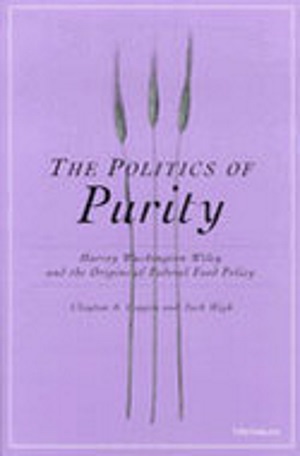 by Clayton A. Coppin and Jack High

From the publisher: Spearheaded by Harvey Washington Wiley, the Pure Food and Drugs Act of 1906 launched the federal regulation of food and drugs in the United States. Wiley is often lauded as a champion of public interest for bringing about a law that required healthful ingredients and honest labeling. Clayton Coppin and Jack High demonstrate, however, that Wiley was in fact surreptitiously allied with business firms that would benefit from regulation and moreover, that the law would help him build his government agency, the Federal Bureau of Chemistry.

Coppin and High discuss such issues as Wiley’s efforts to assign the law’s enforcement to his own bureau. They go on to expose the selectivity of Wiley’s enforcement of the law, in which he manipulated commercial competition in order to reward firms that supported him and penalize those that opposed him. By examining the history of the law’s movement, the authors show that, rather than acting in the public interest, Wiley used the Pure Food and Drugs Act to further his own power and success. Finally, they analyze government regulation itself as the outcome of two distinct competitive processes, one that takes place in the market, the other in the polity.

The book will interest scholars concerned with government regulation, including those in economics, political science, history, and business.