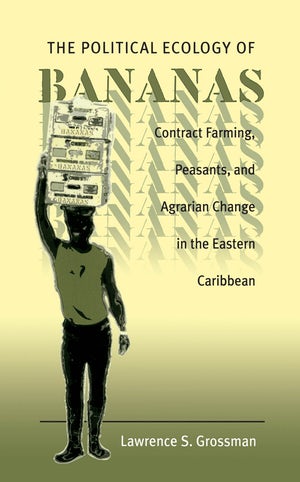 From the publisher: This study of banana contract farming in the Eastern Caribbean explores the forces that shape contract-farming enterprises everywhere–capital, the state, and the environment. Employing the increasingly popular framework of political ecology, which highlights the dynamic linkages between political-economic forces and human-environment relationships, Lawrence Grossman provides a new perspective on the history and contemporary trajectory of the Windward Islands banana industry. He reveals in rich detail the myriad impacts of banana production on the peasant laborers of St. Vincent and the Grenadines.

Grossman challenges the conventional wisdom on three interrelated issues central to contract farming and political ecology. First, he analyzes the process of deskilling and the associated significance of control by capital and the state over peasant labor. Second, he investigates the impacts of contract farming for export on domestic food production and food import dependency. And third, he examines the often misunderstood

problem of pesticide misuse. Grossman’s findings lead to a reconsideration of broader debates concerning the relevance of research on industrial restructuring and globalization for the analysis of agrarian change. Most important, his work emphasizes that we must pay greater attention to the fundamental significance of the “environmental rootedness” of agriculture in studies of political ecology and contract farming.