Pigs, Pork, and Heartland Hogs: From Wild Boar to Baconfest 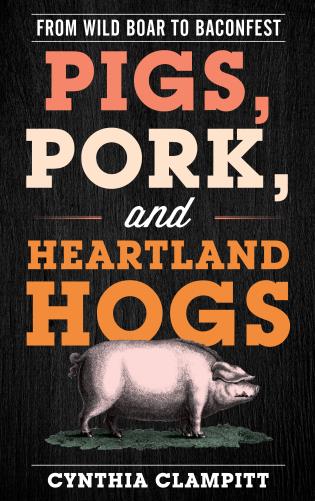 From the publisher: Among the first creatures to help humans attain the goal of having enough to eat was the pig, which provided not simply enough, but general abundance. Domesticated early and easily, herds grew at astonishing rates (only rabbits are more prolific). Then, as people spread around the globe, pigs and traditions went with them, with pigs making themselves at home wherever explorers or settlers carried them. Today, pork is the most commonly consumed meat in the world—and no one else in the world produces more pork than the American Midwest.

Pigs and pork feature prominently in many cuisines and are restricted by others. In the U.S. during the early1900s, pork began to lose its preeminence to beef, but today, we are witnessing a resurgence of interest in pork, with talented chefs creating delicacies out of every part of the pig. Still, while people enjoy “pigging out,” few know much about hog history, and fewer still know of the creatures’ impact on the world, and specifically the Midwest. From brats in Wisconsin to tenderloin in Iowa, barbecue in Kansas City to porketta in the Iron Range to goetta in Cincinnati, the Midwest is almost defined by pork. Here, tracking the history of pig as pork, Cynthia Clampitt offers a fun, interesting, and tasty look at pigs as culture, calling, and cuisine.

Cynthia Clampitt is a writer, speaker, and food historian who has pursued her love of history, culture, and food across six continents. She has written about food history for three decades, but has also written more traditional history and geography for major educational publishers in the U.S., including the Colonial Williamsburg Foundation and National Geographic Learning. In the last few years, her focus has been on the American Midwest, which led to her authoring Midwest Maize: How Corn Shaped the U.S. Heartland and now Pigs. She is a member of the Culinary Historians of Chicago, the Society of Women Geographers, the Agricultural History Society, the Midwest History Association, the Association of Food Journalists, and the International Association of Culinary Professionals.
Rowman & Littlefield, 2018