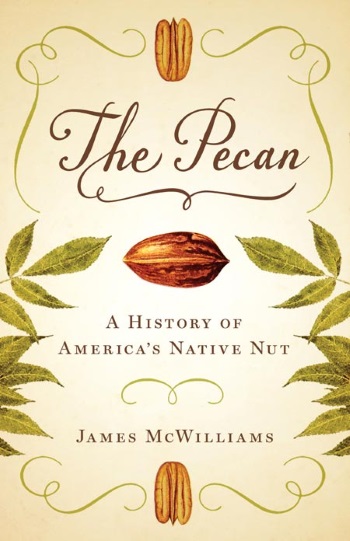 From the publisher: What would Thanksgiving be without pecan pie? New Orleans without pecan pralines? Southern cooks would have to hang up their aprons without America’s native nut, whose popularity has spread far beyond the tree’s natural home. But as familiar as the pecan is, most people don’t know the fascinating story of how native pecan trees fed Americans for thousands of years until the nut was “improved” a little more than a century ago—and why that rapid domestication actually threatens the pecan’s long-term future.

In The Pecan, acclaimed writer and historian James McWilliams explores the history of America’s most important commercial nut. He describes how essential the pecan was for Native Americans—by some calculations, an average pecan harvest had the food value of nearly 150,000 bison. McWilliams explains that, because of its natural edibility, abundance, and ease of harvesting, the pecan was left in its natural state longer than any other commercial fruit or nut crop in America. Yet once the process of “improvement” began, it took less than a century for the pecan to be almost totally domesticated.

Today, more than 300 million pounds of pecans are produced every year in the United States—and as much as half of that total might be exported to China, which has fallen in love with America’s native nut. McWilliams also warns that, as ubiquitous as the pecan has become, it is vulnerable to a “perfect storm” of economic threats and ecological disasters that could wipe it out within a generation. This lively history suggests why the pecan deserves to be recognized as a true American heirloom.

James McWilliams is Professor of History at Texas State University. He is a frequent contributor to the Atlantic, Texas Observer, the New York Times, and other publications.