Out of the East: Spices and the Medieval Imagination 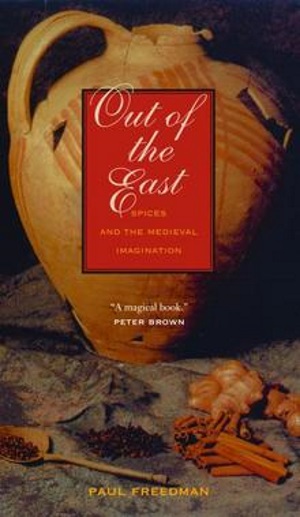 From the publisher: The demand for spices in medieval Europe was extravagant and was reflected in the pursuit of fashion, the formation of taste, and the growth of luxury trade. It inspired geographical and commercial exploration ,as traders pursued such common spices as pepper and cinnamon and rarer aromatic products, including ambergris and musk. Ultimately, the spice quest led to imperial missions that were to change world history.

This engaging book explores the demand for spices: why were they so popular, and why so expensive? Paul Freedman surveys the history, geography, economics, and culinary tastes of the Middle Ages to uncover the surprisingly varied ways that spices were put to use–in elaborate medieval cuisine, in the treatment of disease, for the promotion of well-being, and to perfume important ceremonies of the Church. Spices became symbols of beauty, affluence, taste, and grace, Freedman shows, and their expense and fragrance drove the engines of commerce and conquest at the dawn of the modern era.

Paul Freedman is Chester D. Tripp Professor of History, Yale University. His previous books include Images of the Medieval Peasant, The Origins of Peasant Servitude in Medieval Catalonia, and Food: The History of Taste.