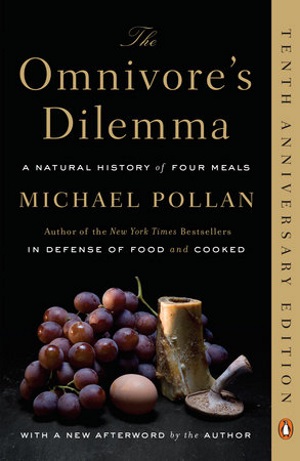 From the publisher: What should we have for dinner? Ten years ago, Michael Pollan confronted us with this seemingly simple question and, with The Omnivore’s Dilemma, his brilliant and eye-opening exploration of our food choices, demonstrated that how we answer it today may determine not only our health but our survival as a species. In the years since, Pollan’s revolutionary examination has changed the way Americans think about food.

Bringing wide attention to the little-known but vitally important dimensions of food and agriculture in America, Pollan launched a national conversation about what we eat and the profound consequences that even the simplest everyday food choices have on both ourselves and the natural world. Ten years later, The Omnivore’s Dilemma continues to transform the way Americans think about the politics, perils, and pleasures of eating.

Michael Pollan, featured on Netflix in the four-part series Cooked, is the author of seven previous books, including Food Rules, In Defense of Food, The Omnivore’s Dilemma, and The Botany of Desire, all New York Times bestsellers. A longtime contributor to the New York Times Magazine, he is also the John S. and James L. Knight Professor of Journalism at Berkeley. In 2010, Time magazine named him one of the one hundred most influential people in the world.