Of Sugar and Snow: A History of Ice Cream Making 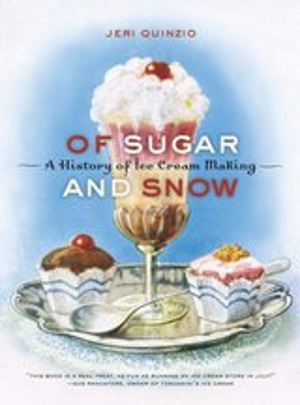 From the publisher: Was ice cream invented in Philadelphia? How about by the Emperor Nero, when he poured honey over snow? Did Marco Polo first taste it in China and bring recipes back? In this first book to tell ice cream’s full story, Jeri Quinzio traces the beloved confection from its earliest appearances in sixteenth-century Europe to the small towns of America and debunks some colorful myths along the way. She explains how ice cream is made, describes its social role, and connects historical events to its business and consumption.

A diverting yet serious work of history, Of Sugar and Snow provides a fascinating array of recipes, from a seventeenth-century Italian lemon sorbet to a twentieth-century American strawberry mallobet, and traces how this once elite status symbol became today’s universally available and wildly popular treat.

Jeri Quinzio is the author of Ice Cream: The Ultimate Cold Comfort and a contributor to the ice cream entry in The Oxford Encyclopedia of Food and Drink in America. She has written on articles on a variety of food history topics for numerous periodicals and newspapers.