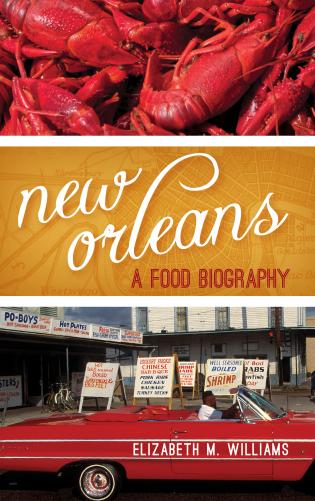 From the publisher: Beignets, Po’ Boys, gumbo, jambalaya, Antoine’s. New Orleans’ celebrated status derives in large measure from its incredibly rich food culture, based mainly on Creole and Cajun traditions. At last, this world-class destination has its own food biography. Elizabeth M. Williams, a New Orleans native and founder of the Southern Food and Beverage Museum there, takes readers through the history of the city, showing how the natural environment and people have shaped the cooking we all love.

The narrative starts by describing the indigenous population and material resources, then reveals the contributions of the immigrant populations, delves into markets and local food companies, and finally discusses famous restaurants, drinking culture, cooking at home and cookbooks, and signature foods dishes. This must-have book will inform and delight food aficionados and fans of the Big Easy itself.

Elizabeth M. Williams is founder and president of the Southern Food and Beverage Museum in New Orleans, which celebrates the food of the American South with exhibits, a library, archives, collections, and programming. SoFab is one of Saveur’s “5 Great Museums Devoted to Food” (5/2011). Williams is also consulting professor at the Kabacoff School of Hotel, Restaurant and Tourism, University of New Orleans. Her roles there include teaching, writing, and researching issues in hospitality law, culinary history and culture, and nonprofit administration. She has contributed a number of articles on aspects of Southern food to journals. Williams has a law degree and co-authored The A to Z Encyclopedia of Food Controversies and the Law (2010).