Near a Thousand Tables: A History of Food 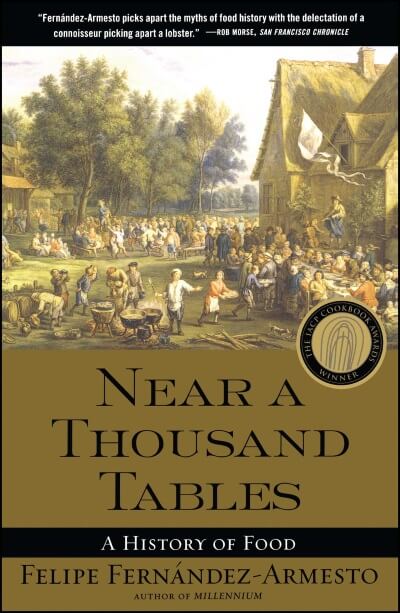 From the publisher: In Near a Thousand Tables, acclaimed food historian Felipe Fernández-Armesto tells the fascinating story of food as cultural as well as culinary history — a window on the history of mankind.

In this “appetizingly provocative” (Los Angeles Times) book, he guides readers through the eight great revolutions in the world history of food: the origins of cooking, which set humankind on a course apart from other species; the ritualization of eating, which brought magic and meaning into people’s relationship with what they ate; the inception of herding and the invention of agriculture, perhaps the two greatest revolutions of all; the rise of inequality, which led to the development of haute cuisine; the long-range trade in food which, practically alone, broke down cultural barriers; the ecological exchanges, which revolutionized the global distribution of plants and livestock; and, finally, the industrialization and globalization of mass-produced food.

From prehistoric snail “herding” to Roman banquets to Big Macs to genetically modified tomatoes, Near a Thousand Tables is a full-course meal of extraordinary narrative, brilliant insight, and fascinating explorations that will satisfy the hungriest of readers.

Felipe Fernández-Armesto is a Professorial Fellow of Queen Mary, University of London, and a member of the Modern History Faculty at Oxford University. He is the author of twelve books.