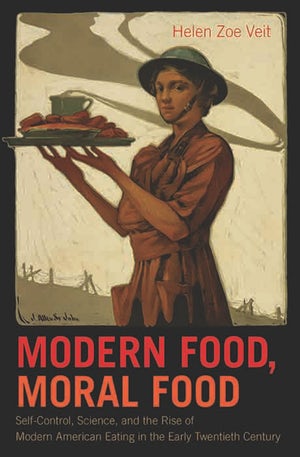 From the publisher: American eating changed dramatically in the early twentieth century. As food production became more industrialized, nutritionists, home economists, and so-called racial scientists were all pointing Americans toward a newly scientific approach to diet. Food faddists were rewriting the most basic rules surrounding eating, while reformers were working to reshape the diets of immigrants and the poor.

And by the time of World War I, the country’s first international aid program was bringing moral advice about food conservation into kitchens around the country. In Modern Food, Moral Food, Helen Zoe Veit argues that the twentieth-century food revolution was fueled by a powerful conviction that Americans had a moral obligation to use self-discipline and reason, rather than taste and tradition, in choosing what to eat.

Veit weaves together cultural history and the history of science to bring readers into the strange and complex world of the American Progressive Era. The era’s emphasis on science and self-control left a profound mark on American eating, one that remains today in everything from the ubiquity of science-based dietary advice to the tenacious idealization of thinness.