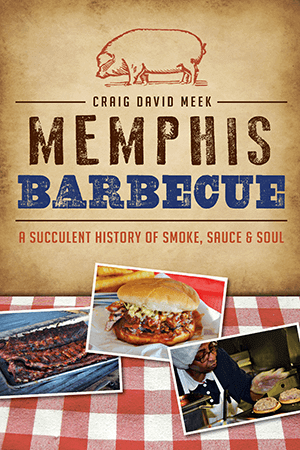 From the publisher: Memphis is equal parts music and food–the products of a community marked with grit and resiliency. The city’s blues and soul music have lifted spirits, while barbecue has been a serious business ever since pork first entered the culinary landscape of Memphis with Spanish explorer Hernando de Soto, who brought the New World its first herd of pigs. Succulent pulled pork and ribs have become part of the fabric of life in the River City, and today they are cooked up in kitchens ranging from the internationally acclaimed, like Corky’s, to the humblest of roadside dives.

Told through the history of its barbecue is the story of the city of Memphis, from legendary joints like Leonard’s Barbecue, where Elvis Presley hosted private parties, to lesser-known places like William’s Bar-B-Q in the West Memphis, Arkansas neighborhood where wild, late-night blues juke joints served as a red-light district across the river from Beale Street in the 1950s and ’60s. Sink your teeth into this rich history chock-full of interviews and insights from the city’s finest pitmasters and ‘cue gurus who continue the long tradition of creating art with meat and flame.

Craig Meek is a lifelong Memphian. He graduated from the University of Memphis with a degree in journalism and has worked as a reporter, photographer and copy editor. For the past three years he has written about his quest to try all the barbecue and soul food restaurants in the area on his Memphis Que blog