Massachusetts Cranberry Culture: A History from Bog to Table 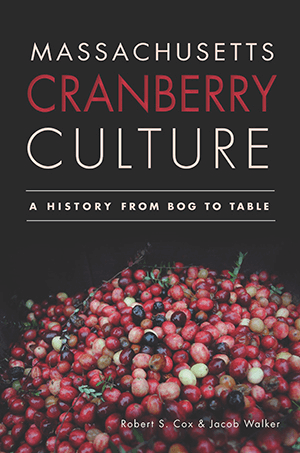 From the publisher: New Englanders know that cranberries are not for holidays alone. For centuries, this tart fruit—a staple in the Yankee diet since before it was domesticated—has reigned over the cranberry heartland of Barnstable and Plymouth Counties, Massachusetts. Dozens of recipes that utilize the “humble fruit” have risen up over the years, the most popular being cranberry sauce, which one imaginative New Englander paired with lobster. The popularity of the berry exploded in the 1840s, and despite occasional setbacks such as the great pesticide scare of 1959, demand continues to rise to this day. Authors Robert S. Cox and Jacob Walker trace the evolution of cranberry culture in the Bay State, exploring the delectable history of this quintessential New England industry.

Rob Cox, a former paleontologist and molecular biologist,  received his doctorate in history from the University of Michigan and currently works at the University of Massachusetts Amherst. He is author of Body and Soul: A Sympathetic History of American Spiritualism (Charlottesville, 2003) and editor of and contributor to The Shortest and Most Convenient Route: Lewis and Clark in Context (Philadelphia, 2004). He and Jacob Walker published previously with The History Press: A History of Chowder: Four Hundred Years of a New England Meal.