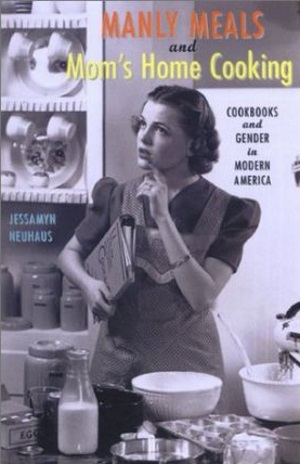 From the publisher: From the first edition of The Fannie Farmer Cookbook to the latest works by today’s celebrity chefs, cookbooks reflect more than just passing culinary fads. As historical artifacts, they offer a unique perspective on the cultures that produced them. In Manly Meals and Mom’s Home Cooking, Jessamyn Neuhaus offers a perceptive and piquant analysis of the tone and content of American cookbooks published between the 1790s and the 1960s, adroitly uncovering the cultural assumptions and anxieties—particularly about women and domesticity—they contain.

Neuhaus’s in-depth survey of these cookbooks questions the supposedly straightforward lessons about food preparation they imparted. While she finds that cookbooks aimed to make readers—mainly white, middle-class women—into effective, modern-age homemakers who saw joy, not drudgery, in their domestic tasks, she notes that the phenomenal popularity of Peg Bracken’s 1960 cookbook, The I Hate to Cook Book, attests to the limitations of this kind of indoctrination. At the same time, she explores the proliferation of bachelor cookbooks aimed at “the man in the kitchen” and the biases they display about male and female abilities, tastes, and responsibilities.

Neuhaus also addresses the impact of World War II rationing on homefront cuisine; the introduction of new culinary technologies, gourmet sensibilities, and ethnic foods into American kitchens; and developments in the cookbook industry since the 1960s. More than a history of the cookbook, Manly Meals and Mom’s Home Cooking provides an absorbing and enlightening account of gender and food in modern America.

Jessamyn Neuhaus is an associate professor of U.S. history and popular culture at SUNY Plattsburgh. She is the author of Housework and Housewives in Modern American Advertising: Married to the Mop.