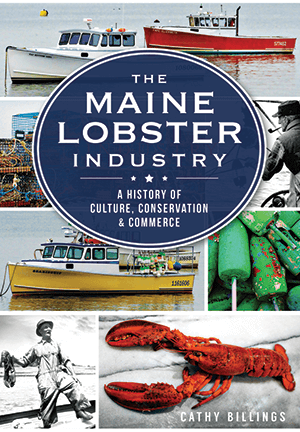 From the publisher: Since the first recorded lobster catch in 1605, the Maine lobster fishery has grown into a multibillion-dollar force. Cathy Billings of the University of Maine Lobster Institute embarks on a journey from trap to plate, introducing readers to lobstermen, boat builders, bait dealers, marine suppliers and the expansive industry that revolves around the fishery. Maine lobster families extend generations back with an eye to their legacies.

Strides in sustainability have been a hallmark of the Maine fishery throughout the centuries, from the time lobstermen themselves introduced conservation measures in the mid-1800s. Today, Maine’s lobster fishery is a model of a co-managed, sustainable fishery. The people who work Maine’s lobster fishery have developed a coastal economy with an international influence and deep history.

Cathy Billings is the associate director for communications and development for the Lobster Institute at the University of Maine. She’s previously served as the vice-president for membership and fundraising for the University of Maine Alumni Association. She also serves on the board of directors for the Maine Lobster Promotion Council and is an instructor with Lobster Academy, an educational program for industry partners.