Liquid Jade: The Story of Tea from East to West 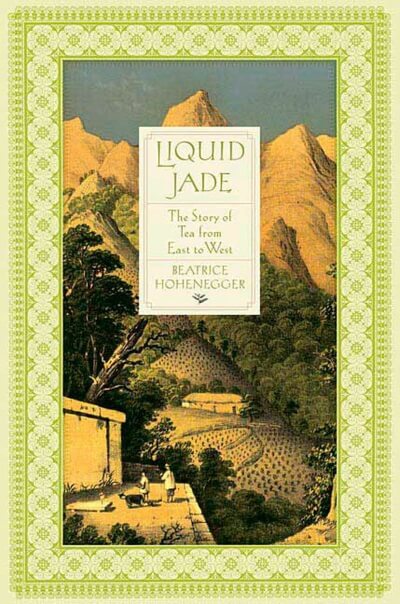 From the publisher: Traveling from East to West over thousands of years, tea has played a variety of roles on the world scene – in medicine, politics, the arts, culture, and religion. Behind this most serene of beverages, idolized by poets and revered in spiritual practices, lie stories of treachery, violence, smuggling, drug trade, international espionage, slavery, and revolution.

Liquid Jade’s rich narrative history explores tea in all its social and cultural aspects. Entertaining yet informative and extensively researched, Liquid Jade tells the story of western greed and eastern bliss. China first used tea as a remedy. Taoists celebrated tea as the elixir of immortality. Buddhist Japan developed a whole body of practices around tea as a spiritual path. Then came the traumatic encounter of the refined Eastern cultures with the first Western merchants, the trade wars, the emergence of the ubiquitous English East India Company. Scottish spies crisscrossed China to steal the secrets of tea production. An army of smugglers made fortunes with tea deliveries in the dead of night. In the name of “free trade” the English imported opium to China in exchange for tea.

The exploding tea industry in the eighteenth century reinforced the practice of slavery in the sugar plantations. And one of the reasons why tea became popular in the first place is that it helped sober up the English, who were virtually drowning in alcohol. During the nineteenth century, the massive consumption of tea in England also led to the development of the large tea plantation system in colonial India – a story of success for British Empire tea and of untold misery for generations of tea workers.

Liquid Jade also depicts tea’s beauty and delights, not only with myths about the beginnings of tea or the lovers’ legend in the familiar blue-and-white porcelain willow pattern, but also with a rich and varied selection of works of art and historical photographs, which form a rare and comprehensive visual tea record. The book includes engaging and lesser-known topics, including the exclusion of women from seventeenth-century tea houses or the importance of water for tea, and answers such questions as: “What does a tea taster do?” “How much caffeine is there in tea?” “What is fair trade tea?” and “What is the difference between black, red, yellow, green, or white tea?”

Connecting past and present and spanning five thousand years, Beatrice Hohenegger’s captivating and multilayered account of tea will enhance the experience of a steaming “cuppa” for tea lovers the world over.

Beatrice Hohenegger was a guest curator of a museum exhibition on the history and culture of tea, held at the Fowler Museum in Los Angeles. She holds a M.A. from the department of history and philosophy at La Sapienza University of Rome.