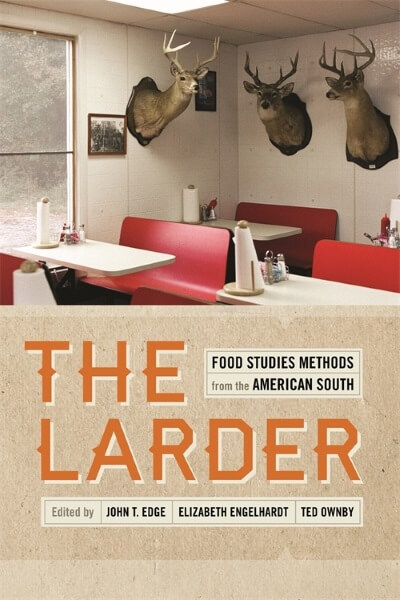 From the publisher: The sixteen essays in The Larder argue that the study of food does not simply help us understand more about what we eat and the foodways we embrace. The methods and strategies herein help scholars use food and foodways as lenses to examine human experience. The resulting conversations provoke a deeper understanding of our overlapping, historically situated, and evolving cultures and societies.

The Larder presents some of the most influential scholars in the discipline today, from established authorities such as Psyche Williams-Forson to emerging thinkers such as Rien T. Fertel, writing on subjects as varied as hunting, farming, and marketing, as well as examining restaurants, iconic dishes, and cookbooks.

Editors John T. Edge, Elizabeth Engelhardt, and Ted Ownby bring together essays that demonstrate that food studies scholarship, as practiced in the American South, sets methodological standards for the discipline. The essayists ask questions about gender, race, and ethnicity as they explore issues of identity and authenticity. And they offer new ways to think about material culture, technology, and the business of food.

The Larder is not driven by nostalgia. Reading such a collection of essays may not encourage food metaphors. “It’s not a feast, not a gumbo, certainly not a home-cooked meal,” Ted Ownby argues in his closing essay. Instead, it’s a healthy step in the right direction, taken by the leading scholars in the field.

John T. Edge is the director of the Southern Foodways Alliance at the University of Mississippi. He is the author or editor of more than a dozen books, including the Foodways volume of The New Encyclopedia of Southern Culture. Elizabeth S. D. Engelhardt is a professor of American studies and women’s and gender studies at the University of Texas, Austin and is the chair of the Department of American Studies. She is the author of A Mess of Greens: Southern Gender and Southern Food (Georgia) and The Tangled Roots of Feminism, Environmentalism, and Appalachian Literature. Ted Ownby is a professor of history and southern studies at the University of Mississippi and is the director of the Center for the Study of Southern Culture. He is the author of American Dreams in Mississippi: Consumers, Poverty, and Culture, 1830-1998 and Subduing Satan: Religion, Recreation, and Manhood in the Rural South, 1865-1920. Sara Camp Milam is the Southern Foodways Alliance’s managing editor. She lives in Oxford, Mississippi.