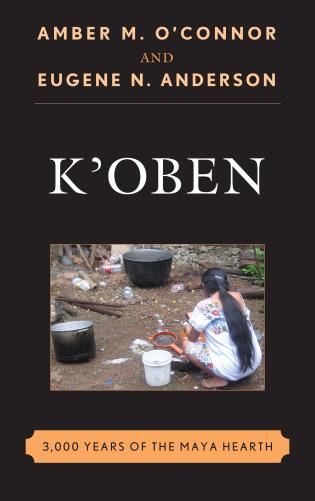 From the publisher: K’Oben traces the Maya kitchen and its associated hardware, ingredients, and cooking styles from the earliest times for which we have archaeological evidence through today’s culinary tourism in the area. It focuses not only on what was eaten and how it was cooked, but the people involved: who grew or sourced the foods, who cooked them, who ate them. Additionally, the authors examine how Maya foodways and the people involved fit into the social system, particularly in how food is incorporated into culture, economy, and society.

The authors provide a detailed literature review of hard-to-find sources including: out of print centuries old cookbooks, archaeological field notes, ethnographies and ethnohistories out of circulation and not available in English, thesis documents only available in Spanish and in university archives as well as current field research on the Maya.

The more recent Maya foodways can be studied from cookbooks, ethnographies and ethnohistorical documentation. Between the two of us, we have assembled a small but representative collection of cookbooks, some self-published and rare, that were available in Merida and elsewhere in Mexico during the late 20th century. Some are quite old, and all reflect local traditional foodways.

Geographically, the book concentrates on Yucatan, Tabasco and Chiapas in Mexico, but will include Pre-Classic and Classic evidence from Guatemala and El Salvador, whose foodways are influenced by Maya traditions.

Amber M. O’Connor has an extensive background in food studies. She’s been a cook, an advocate for food sustainability and security, and a culinary anthropologist. Amber started in the food world as a cook. During culinary school she worked in Oaxaca, Mexico in culinary tourism. Later, she worked in non-profits related to food security. Her current research interests involve researching how processes designed to promote cultural diversity seem to instead constrain individual creative endeavors. In particular she is focused on the impacts of UNESCO’s recognition of the indigenous cuisines of Mexico as “Intangible Cultural Heritage of Humanity” and the re-imagining of authentic “Maya” cuisine by the tourist industry in Quintana Roo and the greater Yucatan peninsula.

E. N. Anderson is Professor of Anthropology, Emeritus, at the University of California, Riverside. He has done research on ethnobiology, cultural ecology, political ecology, and medical anthropology, in several areas, especially Hong Kong, British Columbia, California, and the Yucatan Peninsula of Mexico. His books include The Food of China, Ecologies of the Heart, Political Ecology of a Yucatec Maya Community, and The Pursuit of Ecotopia. He has five children and five grandchildren. He lives in Riverside, California, with his wife Barbara Anderson and three large dogs.