Invention of the Restaurant: Paris and Modern Gastronomic Culture 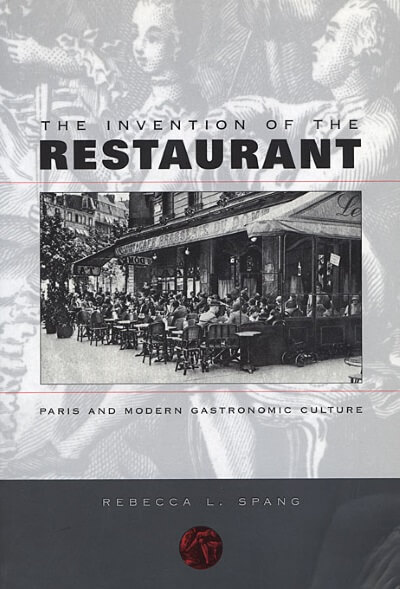 From the publisher: Why are there restaurants? Why would anybody consider eating to be an enjoyable leisure activity or even a serious pastime? To find the answer to these questions, we must accompany Rebecca Spang back to France in the eighteenth century, when a restaurant was not a place to eat but a thing to eat: a quasi-medicinal bouillon that formed an essential element of pre-revolutionary France’s nouvelle cuisine. This is a book about the French Revolution in taste and of the table—a book about how Parisians invented the modern culture of food, thereby changing their own social life and that of the world.

During the 1760s and 1770s, those who were sensitive and supposedly suffering made public show of their delicacy by going to the new establishments known as “restaurateurs’ rooms” and there sipping their bouillons. By the 1790s, though, the table was variously seen as a place of decadent corruption or democratic solidarity. The Revolution’s tables were sites for extending frugal, politically correct hospitality, and a delicate appetite was a sign of counter-revolutionary tendencies.

The restaurants that had begun as purveyors of health food became symbols of aristocratic greed. In the early nineteenth century, however, the new genre of gastronomic literature worked within the strictures of the Napoleonic police state to transform the notion of restaurants and to confer star status upon oysters and champagne. Thus, the stage was set for the arrival of British and American tourists keen on discovering the mysteries of Frenchness in the capital’s restaurants. From restoratives to Restoration, Spang establishes the restaurant at the very intersection of public and private in French culture—the first public place where people went to be private.

Rebecca L. Spang is Professor of History and Director of the Center for Eighteenth-Century Studies at Indiana University. She is the author of Stuff and Money in the Time of the French Revolution.