Hungering for America: Italian, Irish, and Jewish Foodways in the Age of Migration 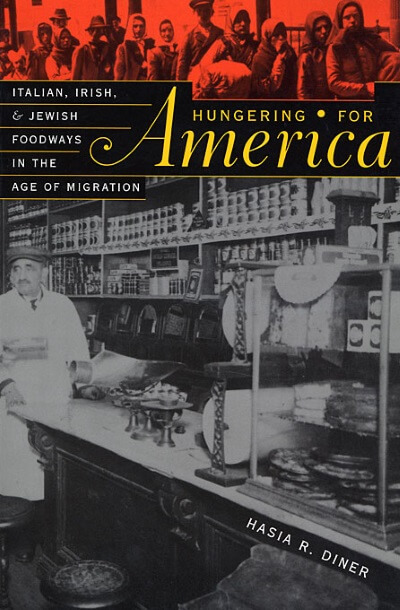 From the publisher: Millions of immigrants were drawn to American shores, not by the mythic streets paved with gold, but rather by its tables heaped with food. How they experienced the realities of America’s abundant food—its meat and white bread, its butter and cheese, fruits and vegetables, coffee and beer—reflected their earlier deprivations and shaped their ethnic practices in the new land.

Hungering for America tells the stories of three distinctive groups and their unique culinary dramas. Italian immigrants transformed the food of their upper classes and of sacred days into a generic “Italian” food that inspired community pride and cohesion. Irish immigrants, in contrast, loath to mimic the foodways of the Protestant British elite, diminished food as a marker of ethnicity. And East European Jews, who venerated food as the vital center around which family and religious practice gathered, found that dietary restrictions jarred with America’s boundless choices.

These tales, of immigrants in their old worlds and in the new, demonstrate the role of hunger in driving migration and the significance of food in cementing ethnic identity and community. Hasia Diner confirms the well-worn adage, “Tell me what you eat and I will tell you what you are.”