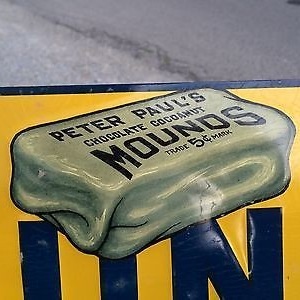 Turkish-born Peter Halajian set off for America in 1890, just as large-scale hostilities were increasing against the Ottoman Empire’s Armenian community. Settling in New Haven, Connecticut, he changed his last name to the more-pronounceable “Paul” and opened a shop selling ice cream, sweets, and fruit.

In 1919, he persuaded five of his closest Armenian friends to join him in opening the Peter Paul Candy Manufacturing Company. The next year, the company introduced a dark chocolate bar with a creamy coconut filling, the Mounds bar, the only candy it made during the next 25 years until it introduced the Almond Joy bar.

See:
“Sometimes You Feel Like a Nut: How Armenian Immigrants Built an American Candy Empire” by Liana Aghajanian on the Dining on the Diaspora website, which documents the Armenian-American Food Experience