How America Eats: A Social History of U.S. Food and Culture 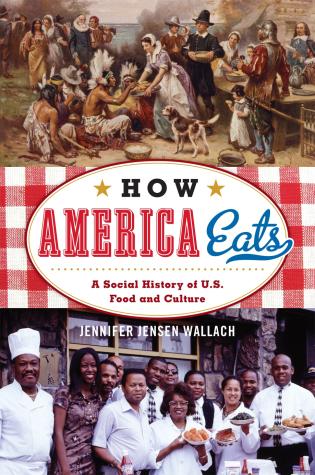 From the publisher: In How America Eats, Food historian Jennifer Wallach examines how Americans have produced food, cooked, and filled their stomachs from the colonial era to the present. Due to the complex history of conquest, enslavement, and immigration, the United States has never developed a singular cohesive culinary tradition. U.S. food practices have been shaped by the various groups that have called a certain geographical space home.

However, more than fusion and friction between different racial and ethnic groups went into creating American foodways. Wallach demonstrates that technological innovations and ideas about industrialism and progress have also impacted what and how Americans eat. Moreover, the American diet is the product of more amorphous factors, the outgrowth of both shared and competing values. The history of food in America reveals changing and contradictory ideas about subjects including nationality, race, technological innovation, gender, politics, religion, and patriotism.

Jennifer Jensen Wallach is associate professor of history at the University of North Texas. She is the author, most recently, of Richard Wright: From Black Boy to World Citizen.