Hometown Appetites: The Story of Clementine Paddleford, the Forgotten Food Writer Who Chronicled How America Ate 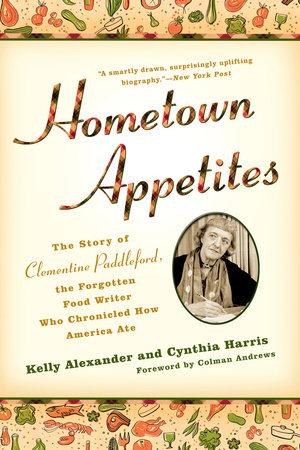 by Kelly Alexander and Cynthia Harris

From the publisher: In Hometown Appetites, Kelly Alexander and Cynthia Harris come together to revive the legacy of the most important food writer you have never heard of. Clementine Paddleford was a Kansas farm girl who grew up to chronicle America’s culinary habits. Her weekly readership at the New York Herald Tribune topped 12 million during the 1950s and 1960s and she earned a salary of $250,000. Yet twenty years after “America’s best-known food editor” passed away, she had been forgotten–until now.

Before Paddleford, newspaper food sections were dull primers on home economy. But she changed all of that, composing her own brand of sassy, unerringly authoritative prose designed to celebrate regional home cooking. This book restores Paddleford’s name where it belongs: in the pantheon alongside greats like James Beard and Julia Child.

Kelly Alexander is a former editor of Food & Wine and Saveur magazines, and her work has appeared in The New York Times, The New York Times Magazine, Gourmet, and Newsweek, among others. She also teaches food writing at Duke University, and is a graduate of Northwestern University’s Medill School of Journalism.