History of the Food of Paris: From Roast Mammoth to Steak Frites 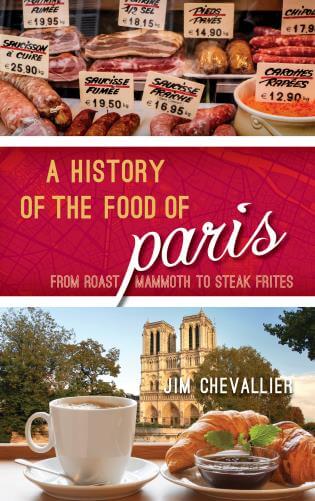 From the publisher: Paris has played a unique role in world gastronomy, influencing cooks and gourmets across the world. It has served as a focal point not only for its own cuisine, but for regional specialties from across France. For tourists, its food remains one of the great attractions of the city itself. Yet the history of this food remains largely unknown.

A History of the Food of Paris brings together archaeology, historical records, memoirs, statutes, literature, guidebooks, news items, and other sources to paint a sweeping portrait of the city’s food from the Neanderthals to today’s bistros and food trucks. The colorful history of the city’s markets, its restaurants and their predecessors, of immigrant food, even of its various drinks appears here in all its often surprising variety, revealing new sides of this endlessly fascinating city.

Jim Chevallier is a contributor to Modernist Bread (2017), Savoring Gotham (2015), The Oxford Encyclopedia of Food and Drink in America, 2nd ed. (2012), the Dictionnaire Universel du Pain (2010) and Consuming Culture in the Long Nineteenth Century (2007). His work on the history of the baguette and the croissant has been cited in Libération, the Smithsonian Magazine, and a number of other publications. He is a former musician, radio announcer, coin dealer, and IT specialist.