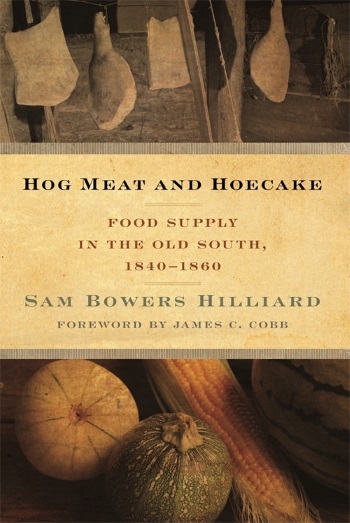 From the publisher: When historical geographer Sam B. Hilliard’s book Hog Meat and Hoecake was published in 1972, it was ahead of its time. It was one of the first scholarly examinations of the important role food played in a region’s history, culture, and politics, and it has since become a landmark of foodways scholarship.

In the book Hilliard examines the food supply, dietary habits, and agricultural choices of the antebellum American South, including Arkansas, Louisiana, Mississippi, Tennessee, Alabama, Georgia, North Carolina, and South Carolina. He explores the major southern food sources at the time, the regional production of commodity crops, and the role of those products in the subsistence economy.

Far from being primarily a plantation system concentrating on cash crops such as cotton and tobacco, Hilliard demonstrates that the South produced huge amounts of foodstuffs for regional consumption. In fact, the South produced so abundantly that, except for wines and cordials, southern tables were not only stocked with the essentials but amply laden with veritable delicacies as well. (Though contrary to popular opinion, neither grits nor hominy ever came close to being universally used in the South prior to the Civil War.)

Hilliard’s focus on food habits, culture, and consumption was revolutionary-as was his discovery that malnutrition was not a major cause of the South’s defeat in the Civil War. His book established the methods and vocabulary for studying a region’s cuisine in the context of its culture that foodways scholars still employ today. This reissue is an excellent and timely reminder of that.

Sam Bowers Hilliard was professor emeritus in geography and anthropology at Louisiana State University. He taught there from 1971 to 1993.