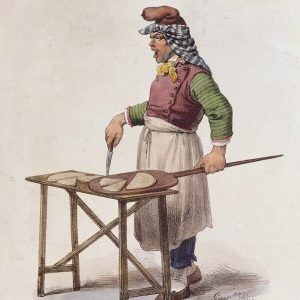 Pizza as we now know it came into being in late 18th-century Naples. Naples had become one of the largest cities in Europe and was growing fast. As the urban economy struggled to keep pace, increasing numbers of the city’s inhabitants fell into poverty. Always rushing about in search of work, they needed food that was cheap and easy to eat. Pizzas met this need. Sold not in shops, but by street vendors carrying huge boxes under their arms, they would be cut to meet the customer’s budget or appetite.

These early pizzas consisted of inexpensive, easy-to-find ingredients with plenty of flavor. The simplest were topped with nothing more than garlic, lard and salt. Others included cheese made from horse’s milk, fish, or basil. Some even had tomatoes, a food recently introduced from the Americas.

See: “A History of Pizza” by Alexander Lee on the History Today website (2018)