History of Howard Johnson’s: How a Massachusetts Soda Fountain Became an American Icon 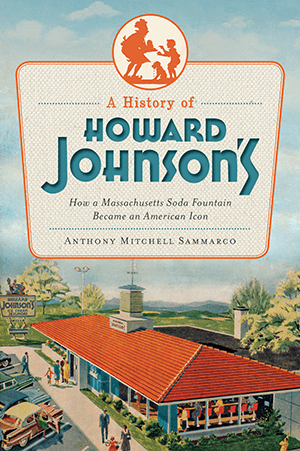 From the publisher: Howard Johnson created an orange-roofed empire of ice cream stands and restaurants that stretched from Maine to Florida and all the way to the West Coast. Popularly known as the “Father of the Franchise Industry,” Johnson delivered good food and prices that brought appreciative customers back for more.

The attractive white Colonial Revival restaurants, with eye-catching porcelain tile roofs, illuminated cupolas and sea blue shutters, were described in “Reader’s Digest” in 1949 as the epitome of “eating places that look like New England town meeting houses dressed up for Sunday.” Boston historian and author Anthony M. Sammarco recounts how Howard Johnson introduced twenty-eight flavors of ice cream, the “Tendersweet” clam strips, grilled frankforts and a menu of delicious and traditional foods that families eagerly enjoyed when they traveled.

Anthony Mitchell Sammarco is a noted historian and author of over sixty books on Boston, its neighborhoods and surrounding cities and towns. He lectures widely on the history and development of his native city.