History of Cooks and Cooking 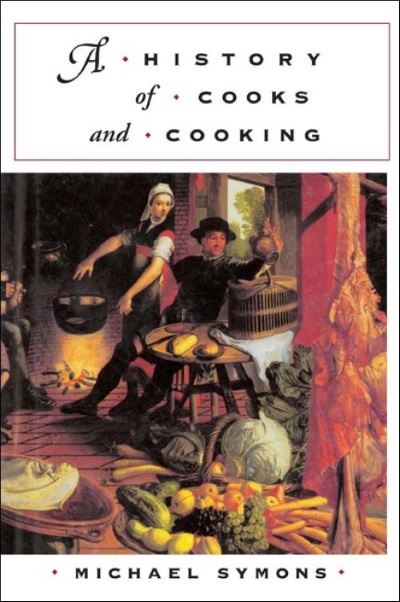 From the publisher: Never has there been so little need to cook. Yet Michael Symons maintains that to be truly human we need to become better cooks: practical and generous sharers of food.

Fueled by James Boswell’s definition of humans as cooking animals (for “no beast can cook”), Symons sets out to explore the civilizing role of cooks in history. His wanderings take us to the clay ovens of the prehistoric eastern Mediterranean and the bronze cauldrons of ancient China, to fabulous banquets in the temples and courts of Mesopotamia, Egypt, and Persia, to medieval English cookshops and southeast Asian street markets, to palace kitchens, diners, and modern fast-food eateries.

Symons samples conceptions and perceptions of cooks and cooking from Plato and Descartes to Marx and Virginia Woolf, asking why cooks, despite their vital and central role in sustaining life, have remained in the shadows, unheralded, unregarded, and underappreciated. “People think of meals as occasions where you share food,” he notes; “they rarely think of cooks as sharers of food.”

Considering such notions as the physical and political consequences of sauce, connections between food and love, and cooking as a regulator of clock and calendar, Symons provides a spirited and diverting defense of a cook-centered view of the world.

Michael Symons is the author of One Continuous Picnic: A History of Eating in Australia and The Shared Table.