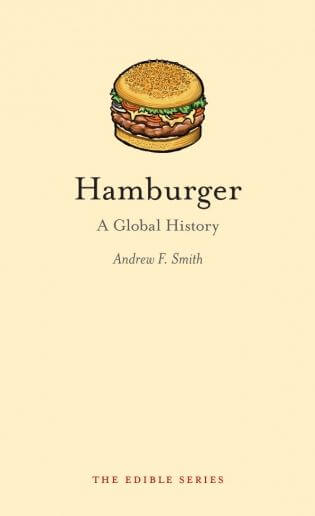 From the publisher: McDonald’s founder Ray Kroc once said, ‘It requires a certain kind of mind to see beauty in a hamburger bun’. The hamburger has been both a source of gluttonous joy and a recurrent obstacle to healthy eating. Now the full beauty of the burger in all its forms is explored in this book.

Andrew F. Smith traces the global history of the hamburger from its humble beginnings as a nineteenth-century street food sold by American vendors. It soon spread to the menus of diners and restaurants, and it came into its own with the 1921 opening of the first US hamburger chain,White Castle. Subsequent successful food chains such as McDonald’s and Wendy’s ensured the burger’s success in the United States and around the world. The hamburger irrevocably changed Americans’ eating habits as it propelled the rise of fast food over home-cooked meals.

At the same time, burgers were making inroads in culture, becoming a rich symbol in paintings, television and cinema. Smith also discusses the wider nutritional, economic and cultural conflicts raised by the hamburger, such as the ‘McDonaldization’ of international cultures. A juicy, meaty and richly illustrated read, Hamburger will stimulate the taste buds of hamburger aficionados the world over.

Andrew F. Smith is a hamburger enthusiast who teaches culinary history at the New School University in Manhattan since 1996. He is the author or editor of twenty-eight books, including: The Encyclopedia of Junk Food and Fast Food (2006) and edited The Oxford Companion to American Food and Drink (2007). His other books include: Hamburger (2008), Eating History: Thirty Turning Points in the Making of American Cuisine (2009), Potato (2011) in Reaktion’s Edible series. The Oxford Encyclopedia of Food and Drink in America (2nd edn 2013), Sugar: A Global History (2015) and Savoring Gotham: A Food Lover’s Companion to New York City (2015). He lives in New York.